As we all know, as the world's leading luxury car brand, Audi with extraordinary control experience, stable handling performance as a leader in high-end car brands. More than 100 years of brand accumulation, so that the Audi four ring to become the dream of car enthusiasts around the world. In the field of engineering cranes, XCMG seems to have the same development with the Audi counterparts. More than 70 years, on behalf of China among the world's high-end industry. With the global leading G technology platform for the full outbreak of energy, one after another birth of the world record, XCMG crane has become the world's preferred hoisting. 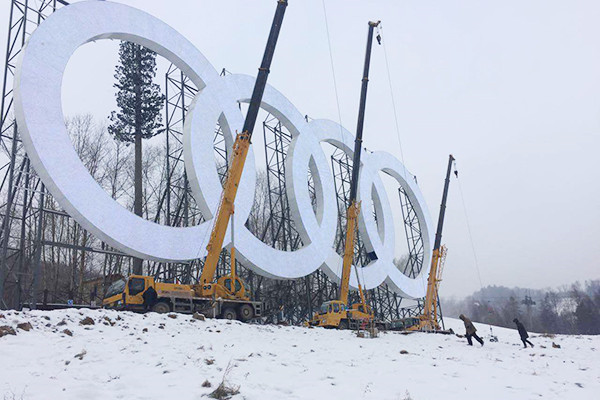 November 2016, a snow so that the temperature dropped to minus 20 degrees, the silver-loaded Jilin Changbai Mountain million international ski resort has officially entered the most lively season of the year. Three cranes in the top of the hill lined up, three brothers will jointly lift nearly 30 meters high Audi four ring advertising light box. In the command of the commander of the lifting of the command, the three cranes at the same time start, with the winch of the synchronous rotation, the huge Audi four rings were slowly raised, only 20 minutes to accurately mounted on the bracket.

Lifting construction person in charge: As the owner of the project Audi, the installation of this project requires a higher, it is necessary to ensure the safety of the lifting process, but also efficient completion. Due to the complexity of the road, the temperature is low, coupled with just under a heavy snow, to the crane performance and low temperature performance performance to bring more severe challenges. As we are in the bidding process to provide all the XCMG crane, so get the project.

The project is Audi in the northeastern region of the largest outdoor light box advertising.