Harbin, The highest latitude in China, the city with the lowest temperature is known for its ice and snow. Every year in November, into the snow concentration period, where it will officially enter the year the most beautiful, the most lively period. And in this beautiful city, the most desirable is the world-renowned "ice and snow world". 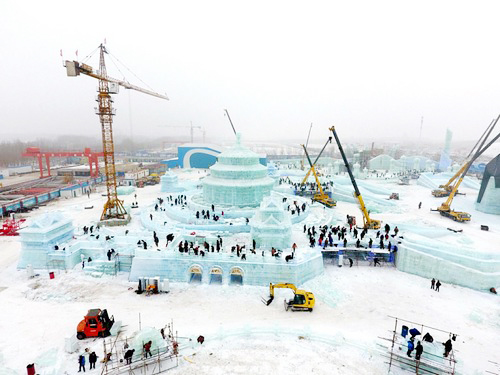 Since 1999 the first international ice festival was born in the Songhua River so far, Harbin ice and snow world for 17 consecutive years for the world presents magnificent ice and snow carnival. Into the gate of the castle, we found that the overall progress of the construction has entered the finishing stage. Although it is day to visit, there is no dream of light visual impact, but there are some magnificent sights. Crystal white snow and snow next to the building, the golden crane is holding the big arms busy doing the final sprint.

According to the site construction manager Wang introduced this year, a total of 70 cranes involved in the construction of the world's ice, of which 64 is XCMG products, which has become the world's nearly 20 years of construction practices. Every year the ice work is in the end of November, early December began to start, because this season, the temperature has been able to reach -20 ℃ below, the ice has also met the requirements, all the ice from the Songhua River.

In the process of ice, through the crane will be a few tons of ice hanging to the flatbed, transported to the big world, but also crane hanging down, the construction process, it goes without saying that all to the crane to complete. So, our internal construction workers are often jokingly said: This is not XCMG crane, we really do not build this big world. 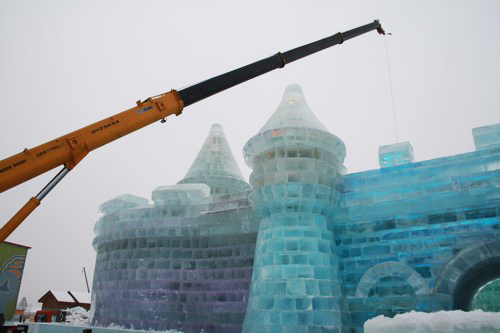 Not far from the two XCMG crane is for a castle to do the final tower to build. Just from the crane cab down the Zheng boss as we introduced, a few days later, the big world will open the door to meet the tourists from around the world, so recently are the day and night even rotation. There are currently 18 cranes are all XCMG brand, this time this year, the driver is not enough, so their own battle.

In the snow and ice world, like Zheng boss so many people fighting day and night. In this winter, each crane driver, boss and construction personnel are full of love for this cause, stick to the post. And when you walk into this fantastic snow and ice world, can you think of them? Christmas, New Year's Day is approaching, will also be the best wishes to these lovely and respectable people!