Into December, and Inner Mongolia Horqin grassland adjacent to the Jilin Baicheng, has long been blocked by the winter, after a few snow, silver-covered prairie highlands have been unable to see the road marking. Deserted wind farms, XCMG QAY500 all-terrain cranes are hearty dripping wind power limit challenge. 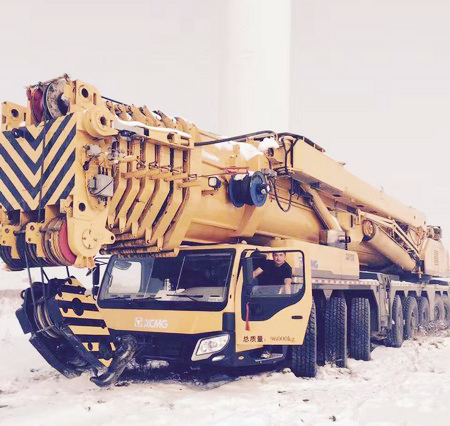 -30 ℃ arctic environment, exhaled breath, will be formed in the eyebrow white cream. Winter solstice day, dawn to the crane engine roar and loud signs of the scene, early to break the grassland quiet morning. Has not yet had time to clean up the car last night covered the snow, QAY500 dragged on nearly 100 tons of heavy body to open the wind tower. Construction Manager Mr. Lu Li introduced: We are the lifting of the company in Liaoning, the inter-provincial to Jilin, but also because of this 500 tons is very sought-after. In fact, according to the initial project plan, the wind power maintenance is completed in the last month, but because the owners in the choice of crane, the first requirement is to use XCMG crane, so the final willing to delay the duration of this car. 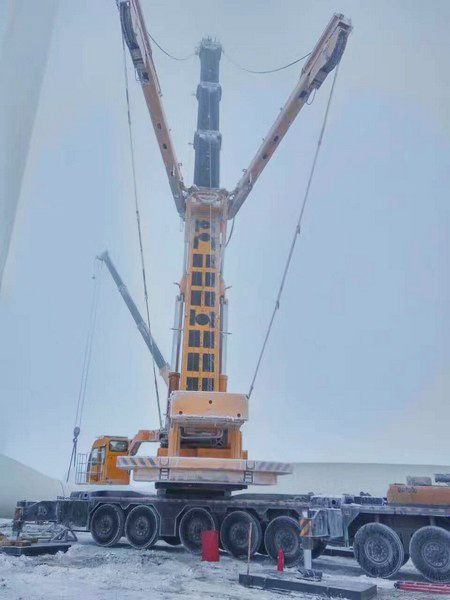 Mr. Lu Li side of the introduction, while commanding the crane selected car position. This crane is the company in August this year in XCMG to buy second-hand equipment, from the car to the present, basically no idle, and has been in the project booking. Because the weather is too cold, many project owners are more afraid to use other brands of cranes.

Just half an hour, the crane to do all the preparatory work, today's task is to repair the assembly of the blade installed above the tower. Morning temperature dropped to the lowest point of the day, Mr. Lu Li opened the hot water filled with a cup, one moment, has become cold, fell to the ground on the formation of ice. At this time the crane arm has been high, the golden arm covered with thick white frost, rope, cylinder, legs, tires, the whole crane is frozen as one. Mr. Lu Li full of confidence in command of all the telescopic, rotary action, everything seems to ripe. It is reported that the wind power overhaul works, QAY500 has been running for nearly 20 days, the average temperature below minus 20 degrees, so arctic environment, to ensure efficient construction without failure, XCMG large tonnage all-terrain crane once again show excellent performance.